Several recent decisions by the EPO Boards of Appeal1 and national courts of EPC Contracting States2,3 have held the priority claim of a patent to be invalid on the grounds that, at the filing date of the patent, the applicant did not have the right to claim priority.  In each of these cases the patent was revoked in view of intervening prior art.  The risk of such loss of priority can be minimised by performing certain checks and actions before filing a patent application that claims priority from an earlier application.

The right to claim priority

The right to claim priority is established by the Paris Convention, which states that any person who has filed a patent application, or his successor in title, shall enjoy a right of priority.  The relevant provisions of the PCT, EPC, and UK Patents Act are based on this4.

The Paris Convention does not set out which law should be used to determine whether succession in title has validly occurred, and recent decisions in Europe have been inconsistent in this respect6.  As a result, it is not clear what criteria a formal assignment of a priority right should meet in order to validly transfer the right to claim priority.  The approach suggested below is our recommendation for best practice, taking account of recent case law.

Please note that the information in this note is simplified and must not be taken as a definitive statement of the law or practice.  We would be pleased to advise specifically in relation to particular cases.  We can prepare and supply assignment documents for signature when requested.

How can US attorney/company practice help avoid loss of priority in Europe?

Many European patents are derived from PCT applications filed in the name of a corporation (for all states other than the US), which claim priority from US provisional applications filed in the name(s) of the inventors.  If certain actions have been taken on filing the PCT application, then potential priority problems in Europe can be avoided. Specifically, loss of priority can be avoided if the right to claim priority from the US provisional application has been assigned from the inventors to the corporation in a timely and appropriate manner.

If assignments can be obtained before PCT filing, we recommend that:

We recommend the above approach even where the inventors are employed by the corporation and/or have already entered an agreement obliging them to assign their rights in future patent applications to the corporation.  Assignments can be worded to assign the right to claim priority in all states other than the US.

If it is not possible to obtain assignments meeting the above criteria then it is safest to include as applicants on the PCT application any inventors who have not executed such assignments.  Rights in the PCT application can then be safely assigned from those inventors to the corporation after the international filing date; for procedural efficiency and economy this should be done and recorded at WIPO during the international phase.

1T62/05
2 UK, Patents Court - Edwards Life Sciences AG v Cook Biotech Inc (12 June 2009)
3 France, Tribunal de Grande Instance - 3eme chamber 2eme section, Judgement du 30.1.2009
4 Article 4A(1), Paris Convention; Art 8(2) PCT; Art 87 EPC; Section 5 of the UK Patents Act
5 UK, Patents Court - KCI Licensing Inc v Smith & Nephew (23 June 2010); EPO Guidelines for Examination A-III 6.1
6 The EPO in T62/05 thought that the relatively onerous procedure set out in the EPC for assigning EP applications was also required for assignment of the priority right.  However, in other cases the EPO has referred to the national law of the country in which the priority application was filed (English law in J19/87, Italian law in T1008/96 and Israeli law in T205/14).  The EPO Guidelines for Examination at A-III 6.1 state that transfer of the priority right “must be a transfer valid under the relevant national provisions”, but EPO Boards of Appeal aren’t bound by these Guidelines.
7 It has not been established by case law whether an assignment bearing the same date the PCT filing date is acceptable.
8 The examples (shown in the attached pdf) assume that there is no pre-existing contract, agreement, or relationship of employment between Drs A, B and C and Corporation X.  If this were the case then these priority claims might be held to be valid in certain jurisdictions, even in the absence of a pre-PCT formal assignment, but this should not be relied on. 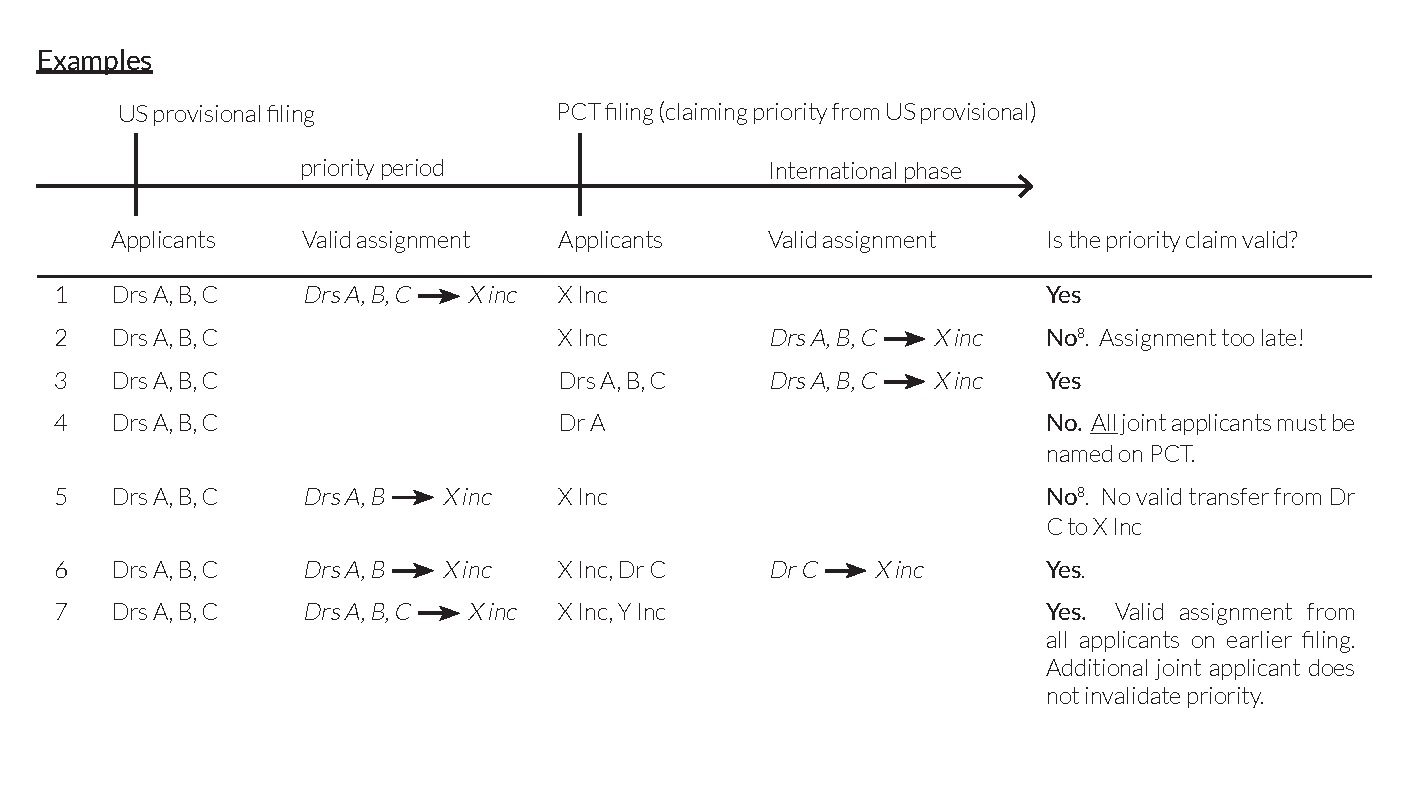