Mark Saffman, professor of physics at the University of Wisconsin-Madison, is a good sport. He’s not at all fazed when asked to select his favourite from a number of Wisconsin state mascots – not bees though, he’s allergic – finally settling on the robin. This turns out to be fortuitous, because research suggests that robins exhibit particular skills that could involve a uniquely quantum interaction between the nucleus of an atom and its orbiting electrons. This atomic ‘hyperfine interaction’ is thought to allow robins to ‘see’ Earth’s magnetic field for navigation.

Though it’s not exactly the same hyperfine interaction at play in the quantum computing architecture that Saffman has been working on for more than two decades (more on that later), the coincidence still lends a light moment to a chat about some pretty serious technology.

"ColdQuanta and Saffman hope to produce a 100-qubit-scale quantum computer within the next year, and a 1,000-qubit system in the next three years or so”

The benefits promised by this technology have raised interest from no less than the Defense Advanced Research Projects Agency (DARPA) in the US. Saffman, in his role as chief scientist at ColdQuanta, is a key participant in a project commissioned by DARPA which aims to develop a commercially scalable quantum computing platform to ‘demonstrate the quantum advantage on real-world problems’. It will build on ColdQuanta’s Cold Atom Quantum technology, which uses ‘ultra-cold atoms cooled to a temperature of nearly absolute zero using lasers to manipulate and control the atoms with extreme precision’. It’s with this technology that ColdQuanta and Saffman hope to produce a 100-qubit-scale quantum computer within the next year, and a 1,000-qubit system in the next three years or so.

The company’s platform is based on the use of cold neutral (caesium) atoms held side-by-side within a lattice of laser light. Each isolated atom acts as a ‘qubit’ – the quantum replacement for the transistors that provide the ‘bits’ used in current computer cores. This atomic approach addresses a number of the key challenges in quantum computing. Each atom is identical, which means that so is each qubit. There is no risk of the manufacturing errors that plague man-made qubits. They don’t interact well with each other, which means they are more immune to damaging external noise and can hold extremely delicate quantum information for a relatively long time. 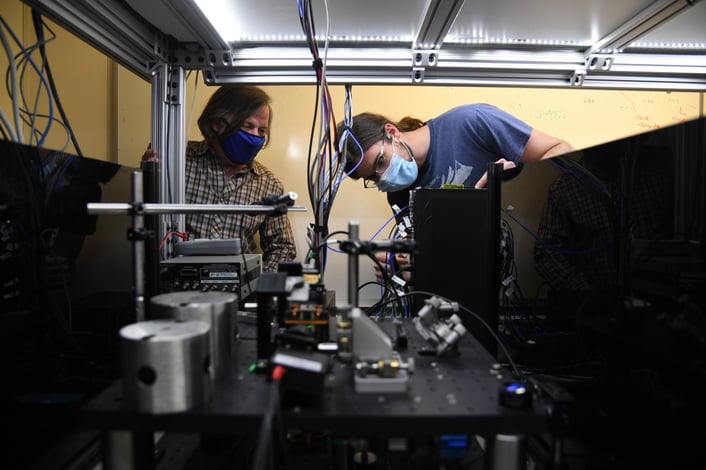 The laser lattice is held within a glass cell that maintains a vacuum and is created by beaming lasers through the cell’s walls. The lattice controls interactions between neighbouring atomic qubits, allowing quantum information to be input and processed across the quantum core. As ColdQuanta’s website explains, lasers and other photonic technologies are used to cool the atoms to a few millionths of a degree above absolute zero, initialise the qubits and orchestrate the computations. The final state of the qubit array is photographed and analysed.

So, where does the humble robin fit in? That requires getting into a bit more detail, which Saffman readily provides, first reminding us that ‘with qubits, we don't talk about zero or one as with a classical bit and the classical computer, but we have superposition states where we think of it as being in the state zero and one or any mixed combination of those two states at the same time’.

‘In the approach with neutral atoms, those zero and one states are internal states of the atoms called “hyperfine states”. They're separated in energy by a certain amount, and we often refer to energies using frequency units. For our purposes, the two states we use in the caesium atom are separated by 9.2 gigahertz.’

Saffman’s quantum computing framework involves ‘trapping atoms with laser beams so that we have available essentially stationary caesium atoms’, he says. ‘We then encode quantum bits into those two energy levels. That gives us a fantastic quantum memory. Then we use other laser beams to excite those atoms to high energy states called Rydberg states where they interact very strongly.’ This interaction is then used to perform logical operations and create entanglement – a uniquely quantum effect which allows separate atoms, the qubits, to act in a highly correlated way. It is this phenomenon that allows the computing power of relatively few qubits to vastly out-gun that of today’s classical computers.

The heart of the matter

Why is this the right way to go? Saffman highlights two aspects. ‘One is that maybe apart from optical approaches, it’s always better to make the components of the quantum computer colder. There’s less thermal energy and less noise, and so for example, solid-state approaches – be they superconducting circuits or quantum dots and silicon – use bulky and expensive refrigerators to cool the material to about 10 millikelvin.

‘We use lasers to cool our atoms to a few millionths of a degree above absolute zero, but they sit inside a very small vacuum cell that is a few centimetres in size – and the cell itself sits at room temperature. So with a much more compact and simpler apparatus, we’re able to get a thousand times colder than solid-state approaches.

‘The other thing really is about the central challenge of quantum computing: we’re trying to satisfy conflicting requirements.’ On the one hand, he says, ‘we want to take advantage of the weird quantum mechanical properties that derive from superposition states and from entanglement. And in order for those quantum properties to be maintained for long enough to complete a useful calculation, we have to have our qubits incredibly well isolated from the environment.’ (That’s because when the qubits come into contact with the environment, those quantum properties go away.)

‘On the other hand, if we had perfectly isolated qubits, we couldn’t do anything with them. So besides isolating them, we have to be able to go in and control them and programme them and tell them what to do to perform a calculation.

‘The different approaches people are developing solve that challenge in a bunch of different ways. What’s special about the atomic approach is that when we have our qubits encoded in these zero and one hyperfine states of the caesium atom, they’re remarkably well isolated from the environment. We can have coherence times [the ‘lifetime’ of a delicate quantum state of the atom] of many seconds or minutes. However, by applying laser pulses that excite those atoms to the high lying states that we call Rydberg states, we enable the atoms to interact with each other with a very strong interaction, which is 12 orders of magnitude stronger than when they’re sitting in the zero and one states.

‘So we’re able to turn on a very strong interaction, do a logic gate operation and entangle the atoms, and then return them to this protected state. And that on-off ratio, as far as I know, is much larger than is possible with any other physical approach.’

Another feature of the atomic approach that Saffman thinks is going to lead to ‘a clear advantage when we talk about scaling and near-term applications, but also for solving tasks like error correction’ is connectivity. Alternative quantum computer designs favoured by Google, IBM and others use tiny superconducting circuits to generate qubits. If you look at a superconducting processor, he says, the qubits are generally hardwired to the neighbouring qubits.

With the atomic approach, there’s no hardwiring involved. ‘The atoms talk to each other, they’re excited, but they could be far apart. The interaction will be weaker, but if we design the protocol for the laser excitation pulses correctly we can have sufficient interaction to entangle the atoms. We have a longer-range connectivity which makes it easier to connect distant qubits with each other, and this connectivity is reconfigurable in a dynamic way. We see this as having increasing importance as we go further.’

Of course, Saffman admits, ‘one of the challenges we have is that it’s difficult to hold onto these atoms forever. We work in an excellent vacuum and we trap the atoms in these optical potential wells defined by laser light, and they sit there very stable.’ However, he explains, every so often an untrapped background gas atom will collide with one of the trapped caesium qubits and kick it out. ‘That happens infrequently, but it does happen at a certain rate.’

‘And so we need an exquisitely good vacuum to make this reliable, and we also need techniques for keeping track of any atoms we’ve lost and replacing them by transporting atoms around. That’s definitely one of the engineering challenges that we have in scaling up this approach. However, ColdQuanta is a good company to be tackling those challenges because we’re really the world leader in making compact yet very high-performance vacuum systems.’

Having applied that frank caveat and noted that he’s never specifically worked on any of the other approaches, Saffman says that he has become ‘more and more convinced over the years’ that the choice to explore neutral atoms for quantum computing was serendipitous.

‘This seems to be a really fantastic approach for building a scalable computer with many qubits,’ he says. ‘The jury is out as to what, ultimately, is going to be the best method and it may well be that several different approaches are good for different things. But certainly the atomic approach is in the race.’

The race is on to realise truly enormous potential

"Quantum computing is an area of technology that has made huge progress since the early demonstration of successful quantum logic gate operations on just one or two qubits. As a technology based on such a deeply counter-intuitive and endlessly intriguing theory as quantum mechanics, it is hugely exciting to see how innovation now offers the genuine possibility of realising the enormous potential of this technology. Quantum computing may enable solutions to pressing issues that affect all of our lives. The impact may be personal, with quantum innovations in data security and machine learning we rely on day-to-day, or global in its reach, for instance by offering a means to develop carbon sequestration technology to offset humanity’s carbon footprint. However, the race is still on to provide a fully fault-tolerant universal quantum computer with the benchmark of 100 logical qubits. With the huge amount of corporate, government and private investment devoted to this goal, it seems certain that protection of IP generated in this sector will continue to rise."

Robotic-assisted surgery: from fiction to reality and beyond

Our goal is to build the world’s fastest electric car