Surfaces pose a unique challenge in the on-going war against pathogenic bacteria. Bacteria may inhabit surfaces that we do not want them to, like those of indwelling medical devices (catheters and artificial hips, for example) and hospital water systems, posing an immediate infection risk.

Furthermore, surfaces can act as more than just a layover and bacteria are able to use them as a base when forming armoured colonies known as biofilms. The formation of the film starts with individual cells adhering to a surface, where they secrete a glue-like mix of exopolymeric substances (EPS) and multiply. Once there are enough bacteria in the biofilm the EPS form a protective layer around the colony, before the bacteria eventually disperse and can start all over again.

In the safe environment provided by a biofilm, bacteria can be exposed to antibacterial agents in non-lethal ways, thus breeding antimicrobial resistance (AMR).

A spectre growing at an alarming rate, AMR is rightly receiving more attention with every passing year (although not necessarily enough in absolute terms). New antibacterial drugs with novel kill mechanisms and new methodologies for stopping or reversing AMR are needed to bamboozle bacteria and fight the swell of super bugs. However, it is increasingly apparent that this challenge must be met on all sides and, indeed, all surfaces.

Efforts to create surfaces that are antibacterial are varied and fascinating. They represent an attempt to create a physical environment that is biased in our favour. All of the approaches below invite us to think at a bacterial scale, where the chemical and physical features of the surface are on a more equal footing.

Whilst trying to prevent barnacles, algae and the like coating the hulls of ships and submarines, Dr Anthony Brennan observed that sharks do not present with any kind of fouling on their skin. Fast-forward and Sharklet is developed. The antibacterial surface of this material is described as anti-fouling as it lowers bacterial adhesion. The surface mimics the approximate topography of shark skin and has a distinctive diamond patination on a microscopic scale. The pattern is thought to prevent adhesion by creating mechanical stress within the bacteria, disrupting normal function.

Studies on Staphylococcus aureus have shown that bacterial surface adhesion can involve individual molecules in the cell wall tethering to a surface. Measuring the adhesion force for individual bacterial cells suggests that nanostructures that are deeper than the length of the tethers can reduce the surface available to these molecular grappling hooks and hence prevent adhesion[1].

The right surface topography can even kill bacteria and is labelled as bactericidal, an ability possessed by the wing surface of certain species of cicada[2]. Zoom in and the wing is bristling with a regular array of nano-scale pillars that can rupture the cell walls of a bacterium on contact. Biomimetic methods employing metal organic frameworks can build on this activity and one approach uses a zeolitic imidazolate framework to make “nano-dagger arrays” which are taller, sharper and stiffer than the pillars on a cicada’s wing[2]. The surface is also positively charged and able to reel in the negatively charged bacteria, resulting in impressive bactericidal activity.

Developing scalable ways of utilising antibacterial surface topography is clearly important if these ideas are ever to be used meaningfully. Recent research has described the development of nanoimprinting methods that can be used to make polymers patterned with free-standing nanoscale structures (such as pillars) with dimensions below 50nm[4]. The antibacterial activity varies by polymer, but most examples demonstrate improved activity, or no significant reduction in activity, relative to their non-structured counterparts. The principal use case discussed is food packaging, recognising that shelf-life is a function of contamination with bacteria and other microorganisms.

Since being recognised by the US Environmental Protection Agency as the first antimicrobial metal, research into the use of copper has grown. In vitro assays suggest solid copper surfaces can kill 99.9% of micro-organisms within two hours of contact. The bactericidal effect is mainly attributed to the release of copper ions which affect the integrity of the bacterial membrane and bacterial wall, generate intracellular oxidative stress, and are genotoxic[5].

One commercial example is Copper Armour (CA)[5]. CA comprises copper particles of various shapes (dendritic, globular) and sizes (nano- to micro-scale) embedded in a methyl methacrylate resin that can be used to create surface coatings. A study of CA reports significant reductions in bacterial populations and promotes the use of CA to complement existing infection control strategies[5].

Some photocatalytic surfaces are described as self-cleaning because they are able to put the energy of UV light to work in killing pathogens. UV light hitting TiO2 excites electrons and forms electron-hole pairs that are inhibited from recombining, due to electron migration within the lattice. The reactivity of the electron-hole pair is then transferred to a target species, directly or indirectly. One mechanism involves the creation of reactive oxygen species (e.g. hydroxyl radicals) which can kill bacteria by attacking the cell membrane.

TiO2 is stable, non-toxic and cheap, making it a very promising candidate for use in a commercially viable antimicrobial surface. Stainless steel surfaces featuring TiO2 nano-column arrays have been made using a microstamping process, involving dip-pen nanolithography and soft lithography (to create a master, then a stamp, respectively) followed by microstamping of a TiO2 suspension on to a stainless steel surface. The researchers report greater reductions in bacterial presence as compared to un-patterned TiO2-coated stainless steel and propose a synergism between the photo-chemical activity and physical topography[6].

A common theme in the current research, discussed above, is the variability in activity as a function of surface type, bacteria species, and other factors – there is no “one size fits all” approach. However, the notion of an inherently antibacterial surface is a universally attractive one .… a passive, readily non-toxic and effective way of combatting bacteria and AMR that doesn’t require a seismic shift in the status quo. 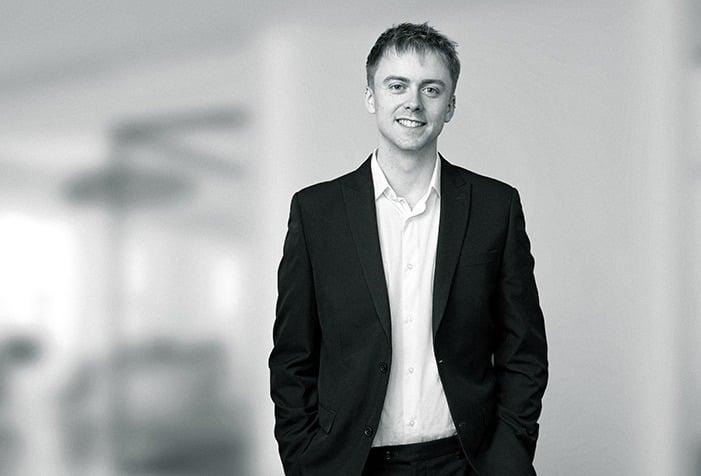 Fynn is a trainee patent attorney in the chemistry team. Fynn has a Master's (MChem) degree from the University of Oxford. During his undergraduate degree, he completed research projects modelling battery cathode materials and ion transport as well as ab initio modelling of quantum tunnelling processes. His thesis centred around simulating the ultrafast dynamics of photo-excited, conjugated polymers and developing novel ways of extracting information through experiment.
Email: Fynn.McLennan@mewburn.com
Comments