Seeing Double at the EPO – what was G4/19 actually about?

Whether double patenting, the granting of more than one patent for the same invention, should be possible or prohibited vexes many patent systems and practitioners around the world. A previous senior partner, David Harrison, co-authored an article about the EPOs approach in 2009 (epi information, 2/2009, page 64), and it has been extensively studied by user organisations such as FICPI (see Resolution EXCO/ES14/RES/003).

G4/19, the most recent decision of the EPO’s Enlarged Board, was less about the criteria for double patenting that have been established by case law since about 2000, but focussed on the legal basis for such objections.

The current version of the EPO Guidelines, issued in March 2021, opens its discussion on double patenting with:

The EPC does not deal explicitly with the case of co-pending European applications of the same effective date filed by the same applicant. However, it is an accepted principle in most patent systems that two patents cannot be granted to the same applicant for one invention.

So for the last 20 or so years applicants and proprietors at the EPO have faced an objection with no clear legal basis in the Convention – the decision in G4/19 now provides this legal basis, although some may see this decision an unsatisfactory sticking plaster over what now looks to be glaring omission in the European Patent Convention.

A European patent application can be refused under Articles 97(2) and 125 EPC if it claims the same subject matter as a European patent which has been granted to the same applicant and does not form part of the state of the art pursuant to Article 54(2) and (3) EPC.

The application can be refused on that legal basis, irrespective of whether it

Keen students of the EPC will be familiar with Article 97(2) EPC:

If the Examining Division is of the opinion that the European patent application or the invention to which it relates does not meet the requirements of this Convention, it shall refuse the application unless this Convention provides for a different legal consequence.

but Article 125 EPC is rather more esoteric:

In the absence of procedural provisions in this Convention, the European Patent Office shall take into account the principles of procedural law generally recognised in the Contracting States.

This article is relied on in two previous Enlarged Board decisions (G 1/99, reformation in peius and G3/04, intervention), both of which related to the procedure for appeal cases. In the current decision, the Board discussed whether this Article could be used to support a “substantive law” issue such as double patenting, but (conveniently) concluded that double patenting was actually a procedural issue.

The Enlarged Board decision extensively referred to the documents recording the work leading to the EPC (the Travaux préparatoires). As an example of this material, the Minutes of the Diplomatic Conference record the following in the discussion about Article 125 EPC: 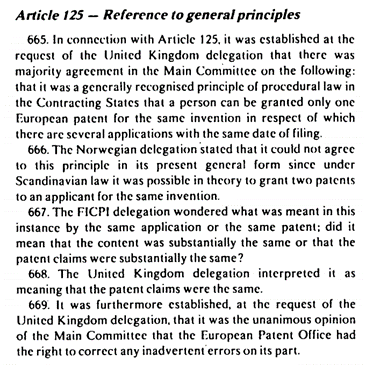 The fact that the majority of the discussion about Article 125 EPC in 1973 was about double patenting does lend support to the decision that Article 125 EPC is the correct basis for the EPO’s approach. The Enlarged Board goes a little further in their reasons for decision in saying:

Therefore, since the competent legislator, here the Diplomatic Conference, established that the prohibition on double patenting was a generally recognised principle as a question of fact, and in addition made it clear that this was a principle falling under Article 125 EPC as a matter of interpretation of the law, the Office was thereby not only empowered to apply this principle but effectively also duty-bound to do so.

The remainder of the Enlarged Board’s decision focuses on the extent to which double patenting should apply, again with detailed reference to the Travaux préparatoires.   Their conclusion was to uphold the three classes of relationships between applications and patents currently applied by the EPO, i.e.:

These are at least clear – we are still left with questions around the interpretation of “same subject matter” and “same applicant”, and no doubt these will debated for years to come.

For example, in a case argued by Simon Kiddle, (T 0879/12), it was established that Swiss type claims and Article 54(5) EPC 2000 claims were not the same subject matter, and therefore double patenting didn’t apply.

Double patenting will remain an unusual objection in examination, but one that applicants must consider when deciding upon a patenting strategy that involves more than one related patent applications.