The Madrid Protocol is an international system for obtaining trade mark protection in a number of countries and/or regions using a single application. Protection (an "International Registration") can only be obtained for countries and regions which have joined the system (member countries), and these are listed below.

International Registrations give a bundle of rights administered centrally via the World Intellectual Property Organisation (WIPO) in Switzerland.

In addition to many individual countries, there are three regions which can be designated in an International Registration under the Madrid Protocol.

One is Benelux: this comprises Belgium, The Netherlands and Luxembourg; they are in effect treated as one country - it is not possible to designate them separately.

Another is the European Union (EU): all member states of the European Union (with Benelux treated as one - see above), except for Malta (which is not currently in the International Registration System), can be designated separately, in addition or as an alternative.

The third is the African Intellectual Property Organization (OAPI); please see below for list of the member countries.

As a United Kingdom trade mark application is examined in general quite rapidly, it is probably worthwhile waiting for grant to occur before filing an International Madrid Protocol Application based on it, so that any problems arising during application will have been dealt with.

An existing UK registration can be used as the basis for an International Registration.

It is possible to base an International Registration on more than one UK application/registration for the same mark.

What are the advantages?

What can be applied for?

Almost any mark that would be acceptable in the member countries can be applied for. The International Application can include as many classes of goods/services as the home application or registration. It cannot include items that are outside the scope of the goods/services of the home application or registration. Within these parameters, it is possible to have different specifications of goods/services for different designations. For example, the United States will normally require a specification which is more specific than the generally worded specifications which are acceptable for most countries/regions.

How do I apply?

We can of course handle the application procedure for you.

The Office of Origin checks the details of the applicant's home application or registration and forwards the application to the World Intellectual Property Organisation.

The offices for the designated member countries/regions each examine the International Registration. They can refuse to accept the registration for their country (or region) in whole or in part on a number of grounds such as:

There can also be queries regarding the list of products/services.

The designated member countries/regions have a period of either 12 or 18 months from being informed of the designation by WIPO in which to notify refusal to the International Bureau or else to issue a statement of grant of protection. The 18 month period may be extended where an opposition is filed against the relevant designation.

We are aware that some countries and regions (in particular OAPI, Eswatini (formally called Swaziland), Ghana, Liberia, Namibia, Sierra Leone, Zambia and Zimbabwe) have not yet enacted domestic legislation so as to explicitly provide protection for marks designated under the International Registration system. It is therefore doubtful that designations will be enforceable in these countries.

Also although designations of Egypt in International Registrations have been recognized there for many years, no provision is made for them in their domestic law, and so there is some slight doubt as to their enforceability.

It is possible to assign an International Registration either partially or totally, including splitting it by designated countries/regions. The assignment can only be recorded if the new owner belongs to, or has a connection with, a member country/region. If this does not apply, the assignment cannot be recorded and the International Registration, or the part being assigned, remains in the name of the old owner.

The national laws of some countries do not provide for the recordal of licences and these countries have issued declarations that such recordals made at WIPO are without effect - these countries are indicated N, however it is not obligatory for such a declaration to be made.

What are the disadvantages of International Registrations?

All the countries in the European Union (EU) except for Malta belong to the Madrid Protocol; leaving aside Malta this gives a choice of four routes of protection for the EU:

The European Union Intellectual Property Office2 treats the designation of the EU somewhat differently to applications submitted directly to them; please see our separate page for details.

A particular advantage of designating the EU (over a directly filed European Union Trade Mark) is that if the designation of the EU is withdrawn, refused or ceased to have effect (as opposed to the International Registration as a whole), that designation can be converted into subsequent designations of EU member states (except for Malta, and with Benelux counting as one) which should give substantial cost savings over the other option, conversion to national applications, which is the only option for directly filed European Union Trade Mark applications and registrations.

There are various other advantages and disadvantages to the various routes: please see our page Trade Marks: What Route to Protection? for further information.

As Brazil, Colombia and Mexico have joined the Madrid Protocol, and as applications can be filed in Spanish, it is hoped that further countries, especially those in Central and South America, almost all of which of which are Spanish-speaking, will sign up. 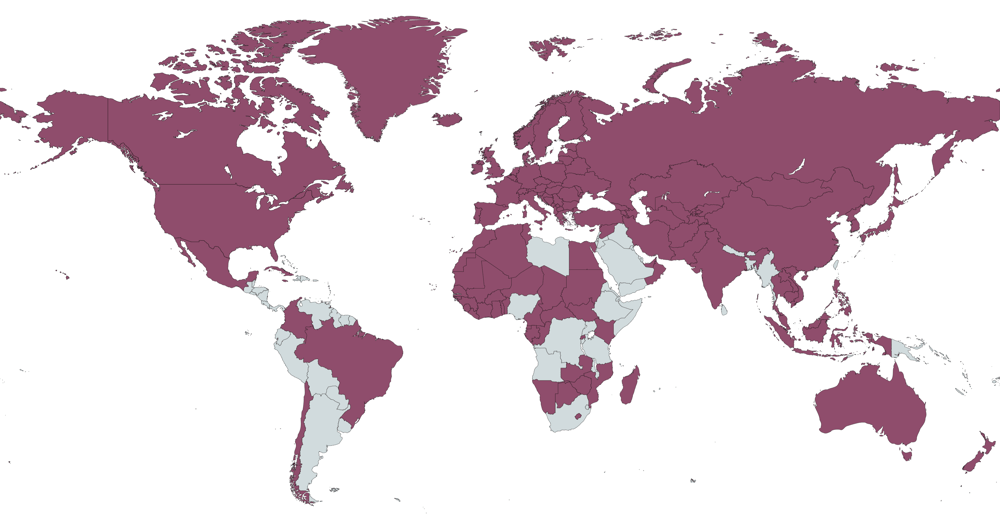 The member countries of the Madrid Protocol are:

2) i.e. Belgium, The Netherlands and Luxembourg - which are designated as one "member country".

3)  Constituent territories of the Netherlands Antilles until it was dissolved in October 2010.

5)  Only effective in Southern (Greek) Cyprus because of the political situation in that country.

7)  Automatically covers Jersey and also some (but not all) overseas territories of European Union countries. Does not cover Northern Cyprus.

8)  Including all Overseas Departments and Territories.

9)  Does not currently include Tokelau.

11) There are special requirements for licence recordals for The Philippines.

12)  The UK extended the application of the Madrid Protocol to the territories of Gibraltar and Guernsey with effect from 1 January 2021. Also covers the Isle of Man, Jersey and the Falkland Islands.

N)  Recordal of licences has no effect.