Forward spoke with Jelmer Renema of Dutch firm QuiX about why photonics technology has so much potential for quantum computing.

The QuiX story started with ‘a piece of scientific serendipity’, says Jelmer Renema, its chief technology officer. As he explains it, the company – which is working to create a plug-and-play integrated and reconfigurable light-based quantum processor – started as a result of a collaboration between the University of Oxford, when Renema was a junior research fellow there, and the University of Twente in the Netherlands.

At one point during his work on quantum information processing, recalls Renema, ‘we were stuck with a lack of processors, of suitable large-scale photonic chips. Then a postdoc from Twente came in and said that it just so happens there was precisely the thing we needed lying around at that university. We organised for the device to come to Oxford, did a few measurements and realised that it was incredibly suitable for our purposes.’

When Renema later returned to the Netherlands, he ‘invited himself’ to give a talk on his work at photonic chipmaker LioniX, and within a few months its CEO Hans van den Vlekkert approached him and asked him if he’d like to start a company. The answer was yes, and QuiX was born.

In December 2020, the company demonstrated the world’s largest universal quantum photonic processor – ‘the device at the heart of an optical quantum computer’, according to a press release. While its plug-and-play device is compatible with all photon sources and commercially available, Hans van den Vlekkert explains that the processor ‘is not yet suited for industrial applications’. However, he continues: ‘With this as a starting point, we will rapidly increase the capacity of our processors towards real-world applications.’

The fact that QuiX has achieved this milestone in two years and with a team of just nine, says Renema, is a testament to the company’s ability to ‘piggyback’ on 20 years of LioniX’s development of technologies for high-end classical photonics applications, ‘all of which turns out to be useful for quantum photonics’. The team could reach into a ‘tremendous toolbox of optical components, fabrication technologies and know-how that is present in this classical photonics ecosystem’ and then add its own knowledge about what is necessary to make that useful for quantum.

In reality, the system doesn’t actually create qubits. Instead, the assembly guides photons through a chip that incorporates a matrix of intersections, with power arising from the meetings of light particles at those points. The more photons involved, the more complex the problem you can solve.

“When connected to a series of single-photon sources, the photonic processor acts ‘as a switchyard for light”

When connected to a series of single-photon sources, the QuiX photonic processor acts, Renema says, ‘as a switchyard for light’ by setting up a series of parallel tracks that photons can follow. This creates the conditions for light to jump (‘switch’) from one track to another, and then go out again on another series of tracks. The ‘tracks’ are tuneable where they meet, and you can make any arbitrary optical transformation between a series of these channels. As quantum system engineer Dr Caterina Taballione explains in an online webinar: ‘When the photons meet, travelling across these chips, they build up entanglement. This gives you the key to do powerful things…’ 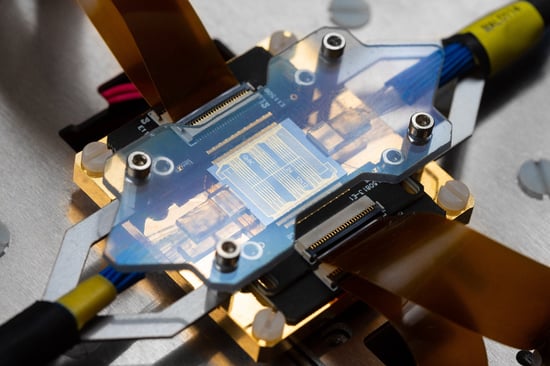 Rather than choosing tracks and making a switch, each photon can go through multiple tracks at the same time in a way that only quantum behaviour allows. When a measurement is taken at the end of the exercise, it reflects one of the various potential outcomes. (Quantum interference happens between the many paths that lead to any one measured outcome.) This approach to encoding is made programmable and, says Renema, ‘is what is special about our chip’.

QuiX can supply an external piece of control hardware that can influence what the chip is doing and the computations it performs. For Renema, ‘this is the heart of our optical quantum information processing device, essentially – an optical quantum computer’. 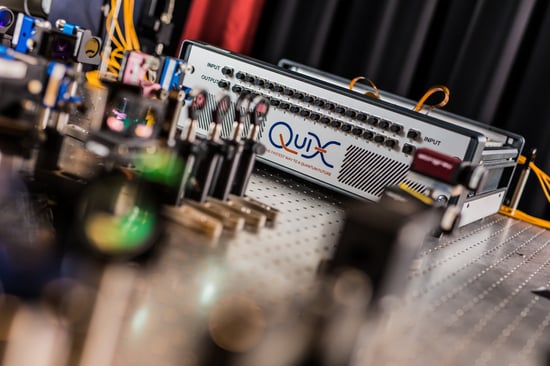 This approach differs from other quantum computing approaches being pursued, which aim to operate using quantum logic gates – so-called ‘universal’ quantum computers – based on non-photonic qubits, such as atoms or ions. In fact, applying a logic gate approach to photonic processors is fraught with technical difficulty, explains Renema, because although the theory ‘does allow you to create qubits out of photons’ the practice is quite different. QuiX’s system neatly side-steps this problem, he says, because ‘the encoding of the system is in the path information’.

Lighting the way ahead

Of course, with other organisations working on alternative routes to creating qubits, a crucial question is ‘Why photons?’. Renema quickly and easily sets out the compelling arguments for this approach.

‘Photons are a very low-noise system because they hardly interact with their environment at all. This is in contrast to, say, an electron – which feels every possible charge in the surrounding environment, and if you take two electrons and stick them together, they are certain to interact. With photons, it’s the exact opposite; it actually takes a lot of work to get them to interact with each other. This is actually the challenge.’

There is another important aspect to relying on photons, he says, which is that you don’t need to take them to ultra-low temperatures. ‘A lot of quantum computing technologies are limited by how many wires you can get into a dilution fridge, at what noise level, at what temperature and so on. The nice thing about this processor is that it’s at room temperature, so it sits on your desk and does quantum stuff and you don’t need to cool it.’

And again, Renema stresses this approach’s high degree of compatibility with existing technology. ‘We are very conscious of the fact that we have one of the pieces of the puzzle, but not all of them. For example, making single-photon sources is a whole other game, so we’re collaborating with people who do that, and making detectors is also not a trivial thing. Fortunately, there seems to be an entire ecosystem of European photonic quantum technology companies emerging.’

Over the next two years, the company’s plan is to take the processor to 50 optical modes, a goal that Renema says faces ‘no fundamental roadblocks’. Asked whether this speed of development is aspirational, Renema argues that the timeline is eminently achievable – yet it acknowledges another reality for quantum researchers. ‘Why have we not fabricated a 50-mode photonic processor on day one? For a simple reason: you need to build up experience. Controlling these switches is a non-trivial problem, which gets harder the larger you make your system. We are not so much building up the technology but building up our knowledge of how to control it.’

"From a slower start than others in the quantum computing race, photonic quantum computing has now become a very serious contender. Helped by headline-grabbing successes in photonic processors developed in China, this branch of quantum technology may well develop more quickly to implementation, helped by a mature phonics industry infrastructure already in place. Developments in enabling technologies such as single-photon sources and single-photon detectors may be central to achieving this, and those technology areas look likely to see strong innovation in future. It’s exciting to see the rapid growth of new start-up companies passionate about reaching this goal."

Learn why Mark Saffman, chief scientist at ColdQuanta, believes an atomic approach has all the hallmarks of a winning quantum technology