Energy storage: batteries and beyond

Better storage is the key to a cleaner energy future, so what technologies are poised to bring the breakthrough? Kerry Taylor-Smith explores the current terrain.

The global population is growing, and so is the demand for power – but growing just as quickly is the realisation that fossil fuels must be cut out of the generation equation.

Concerns around climate change and pollution have prompted countries around the world to turn to renewable sources for a greater proportion of their energy needs. It’s necessary in order to ‘free the environment of fossil fuel contamination, especially in the most populated cities around the world,’ explains Professor Maria Helena Braga, head of the engineering physics department at the University of Porto. ‘China, for example, is pushing the electrification of society, as it is impossible to breathe well in big cities such as Beijing.’

That means using a range of renewable energy sources, which are clean and attractive. However, renewables can also be intermittent: the sun and the wind, for example, can only produce energy at certain times. As a result, cracking the problem of energy storage is crucial to ensuring a ready supply of sustainable electrical power.

‘Energy storage technologies are among the most important components of a low-carbon energy system,’ says Dr Ajay Gambhir, senior research fellow at the Grantham Institute, Imperial College London. ‘Renewable electricity generation technologies are now among the cheapest ways to generate electricity without carbon dioxide emissions, so they are forming the basis of the decarbonisation of electricity systems in many parts of the world.’

‘The use of some of these resources will push investment in energy storage like capacitors, batteries and fuel cells, since the grid is not prepared to deal with intermittent energy generation/consumption at the household level,’ adds Braga, who is also a researcher at the Institute of Science and Innovation in Mechanical and Industrial Engineering’s Associated Laboratory for Energy, Transports and Aeronautics.

Presently, batteries are considered the most effective way to store energy, and lithium ion (Li-ion) batteries are the gold standard. These batteries are compact, efficient and powerful enough to fuel everything from mobile phones to electric vehicles (EVs). They are also likely to make up the bulk of the energy storage capacity required to allow renewable energy sources to replace fossil fuels.

However, these batteries have their limitations. They can be heavy and expensive – particularly in EVs – and contain rare elements such as cobalt or nickel as their cathode material. Alternatives must be cheaper, lighter and more sustainable if they are to make an impact. Consequently, battery technology is an area of constant innovation.

Energy storage technologies are important tools for network operators to help balance the frequency of the grid and optimise the grid electricity supply, says Andrew Crossman, director at Infinite Renewables Group, a specialist wind power and renewable energy scheme developer based in south Wales. ‘Energy storage helps to reduce congestion and maintain voltage on the grid,’ he explains. ‘It can also be used at a local level for time-shifting the use of power to reduce energy costs at peak times and to maximise the use of renewable resources.’

Large-scale battery installations are already cropping up across electricity grids worldwide, including in the UK. Infinite Renewables has partnered with GS Yuasa Batteries and the University of Sheffield to develop the ADEPT battery storage and management system. ‘This utilises a combination of lithium-ion and lead acid batteries,’ Crossman explains. ‘The ADEPT system will be integrated into our Infinite Energy Centres to maximise the benefits of renewable generation and also maximise local consumption of the power that’s generated.’

Research into alternative batteries for EVs is also well under way, with US company Sion Power ‘working aggressively to meet automotive industry expectations for next-generation cell performance,’ according to Jeff Britt, its chief operating officer. The Brookhaven National Laboratory spin-off is developing a rechargeable battery to equal or exceed the highest specific energy, energy density, cycle life, safety and charging rate of any product on the market. ‘This is a steep goal for a single battery cell, as any battery company can tell you,’ says Britt.

The company understands the pressing need to advance EVs and has dedicated all of its efforts to achieving this goal. ‘Over the past six years, our main focus has shifted from lithium-sulphur to developing lithium-metal anode technologies, which we call Licerion®,’ explains Britt. These rechargeable batteries pair proprietary lithium-metal anode technology with conventional lithium-ion cathodes to achieve a combination of ultra-high energy and long cycle life and will play a significant role in meeting future global electric mobility needs, he concludes.

As good as lithium-ion batteries and their variants are, they’re unlikely to meet future requirements and support the imminent boom in industry.

Dr Billy Wu, senior lecturer in energy and manufacturing at the Dyson School of Design Engineering, Imperial College London, heads a research group that, he says, ‘works at the interface between fundamental science and the engineering application of energy devices such as batteries, hydrogen fuel cells and supercapacitors’. ‘This spans developing new materials for more energy-dense batteries, how to build them into larger systems with thermal management systems, and how to control these systems effectively to make sure they’re safe and longer lasting,’ he explains.

Part of his focus is on supercapacitors, which store energy as a static electrical charge. Those used in energy storage applications feature special electrodes and electrolytes and have a very high capacitance. They can undergo frequent charge and discharge cycles – almost indefinitely – at high current and short durations. This makes them ideal for bridging power gaps lasting from a few seconds to a few minutes, compared to the longer duration energy storage and output offered by batteries. Combining the two into a hybrid battery meets both the long- and short-term needs and reduces battery stress, resulting in a longer life.

Braga’s work focuses on ‘out of the box’ solutions for the next generation of all-solid-state energy storage devices. This battery technology uses solid electrodes (ceramics, glass or sulphides) and, importantly, a solid electrolyte, instead of the liquid or polymer gel equivalents usually found in lithium-ion or lithium polymer batteries.

‘We use different architectures of cells based on a ferroelectric family of electrolytes that we developed in 2014,’ Braga explains. Ferroelectric materials polarise spontaneously at a certain temperature, creating a voltage across their surface. Battery technologies usually try to avoid polarisation, but Braga uses this natural polarisation to increase the electrical energy stored in a device and transfer charge inside the cell. Her team has also explored how temperature enhances the ferroelectric-electrolyte properties to increase the energy capacity and to tune other features of this family of electrolytes ­– to optimise the novel cell architectures, many of which are still under investigation.

Some energy storage technologies already in use are functioning side-by-side. Electric trucks, for example, use fuel cells, batteries and capacitors. ‘These technologies do not cover the same range of power and energy densities,’ explains Braga. ‘The capacitors are used for starting the vehicles, operating the windows, the lights and the radio; the batteries cover the intermediate power and energy densities; and then the fuel cells cover the long run.’ Braga believes that collaboration between these technologies – perhaps in the form of hybrids – will only increase and that ultimately cell structures will become multifunctional.

She points to the development of structural batteries, including materials that carry mechanical loads while storing electrical energy. These might be walls, shingles, doors or hoods. ‘All-solid-state energy-harvesting and -storing devices are going to evolve and will eventually be used in many applications, either working solo or in conjunction with other technologies such as photovoltaics, triboelectrics, piezoelectrics and thermoelectrics,’ she adds.

“All-solid-state energy-harvesting and -storing devices are going to evolve and will eventually be used in many applications, either working solo or in conjunction with other technologies”

Many emerging energy systems also consider the role of hydrogen, which will become increasingly important in the coming years, says Wu. ‘It’s difficult to scale batteries to the GWh [gigawatt hour] scale, so there is interest in taking excess electricity from wind and solar and electrolysing water to make hydrogen,’ he explains. ‘This can either be used directly in a fuel cell to make electricity, put into the natural gas network to decarbonise heating, or used in other industries such as the decarbonisation of steel making.’

Nuclear power and carbon capture and storage may also have a role to play, suggests Gambhir. ‘A huge range of other technologies and fuels like hydrogen and biofuels will be central to the low-carbon transition,’ he says. ‘And at the heart of it will be energy efficiency, so we can enjoy the same transport, heating, cooling, appliances and other services we have today, but with the expenditure of far less energy.’

Of course, in the space of one article, it’s impossible to touch upon the many promising technologies under investigation. But what seems clear is that no single technology can solve every challenge – so hybrid systems will likely come to the fore. 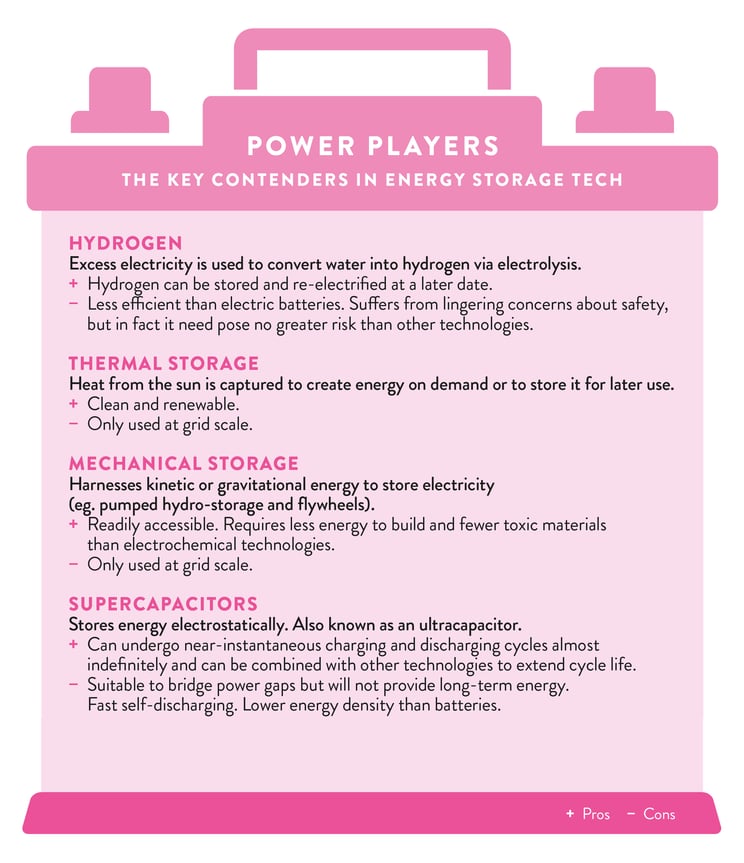 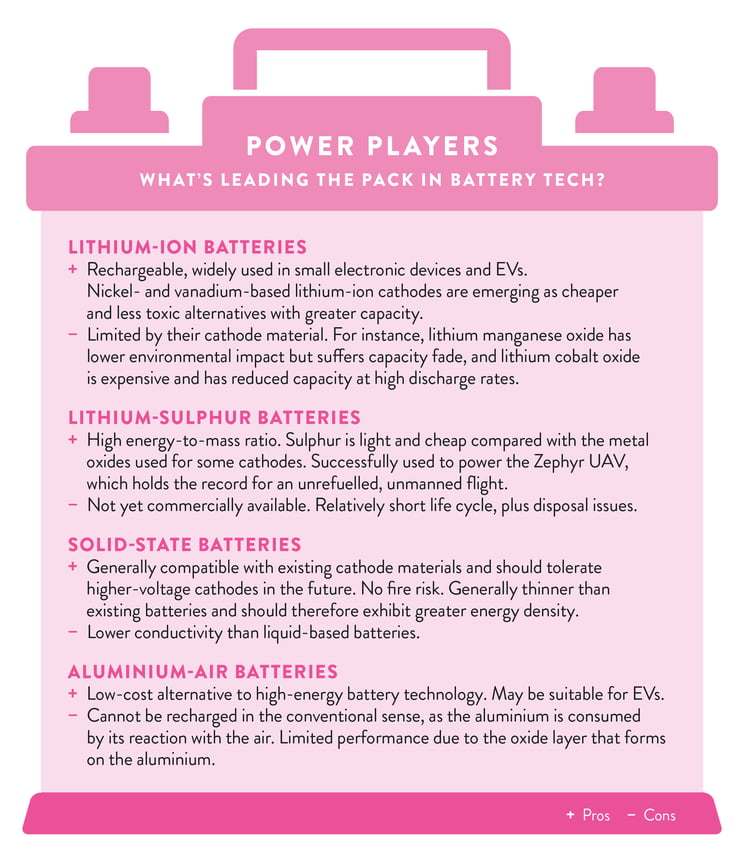 "It looks like huge advances in energy storage technology are inevitable as we advance through the 21st century. It now seems unquestionable that in order to tackle the related issues of climate change and pollution, it is imperative to decarbonise our heating and transport and provide improved technological solutions which facilitate renewables as a greater proportion of our energy mix. It is beyond doubt that lithium-ion battery technology will be a central pillar of future energy storage, but we are increasingly seeing alternative battery technologies moving to the fore along with supplementary energy storage innovations such as supercapacitors and hydrogen fuel cells. The extent of valuable IP in the energy storage area has snowballed over the last two decades and shows no signs of slowing down any time soon."