The UK established an independent system of design law with the Calico Printers’ Act of 1787, which conferred a short term of copyright to merchants creating valuable fabric patterns. Registrations were introduced back in 1839, when the second Copyright of Designs Act 1839 allowed for the protection of “ornamental” designs.

This independence was lost with the harmonisation of design law across Europe arising from the European Designs Directive (98/71/EC) in 1998. This was followed by the introduction of a central registration system in 2004 via the Council Regulation on Community Designs (6/2002/EC).

When the European design system began, it offered a very attractive way to achieve design protection across European member states. This led to a drop of about 60% in filings at the UK IPO between 2002 and 2005 (from 9,500 to 3,600), while filings for Community Designs rose from zero to 63,000 in the same period. 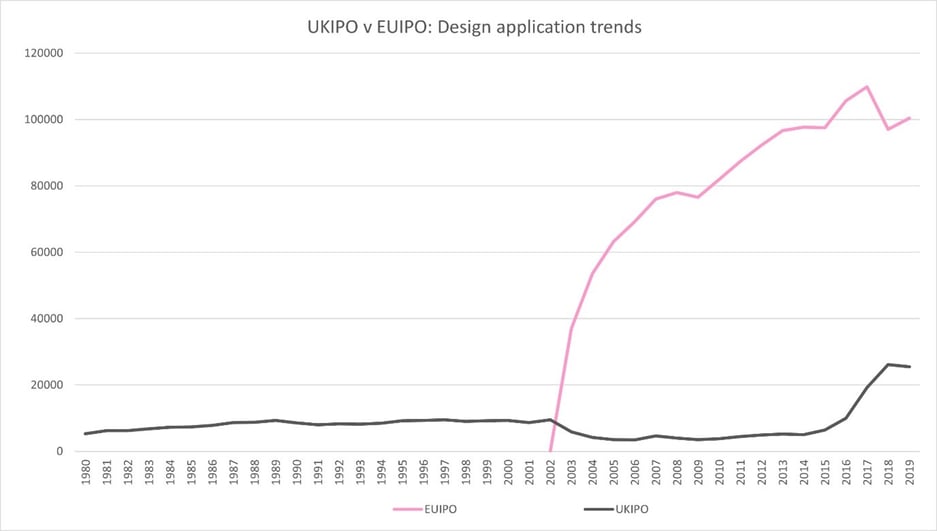 However, what the headline figures don’t show is that this decline in UK design filings was almost entirely due to a drop in applications originating from outside the UK. In effect, the UK design registration system became almost entirely domestic. The lowest-ever proportion of non-domestic UK design filing recorded was in 2012, coming in at just 3.5%. What’s also interesting is that his stagnation came to an end in 2015, when UK design application filings began to rise significantly. So, what accounts for this rebound?

The likely cause of the initial inflection was the launch of the UK IPO’s online design application system in September 2015. This made filing for UK design protection much simpler.

This was followed by a consultation on design fees in 2016, undertaken when the UK IPO realised that its filing fees were not competitive when compared against those for filing Registered Community Designs (RCDs). A new scheme for filing fees entered into force on 1 October 2016, which significantly reduced the fees for filling multiple applications – and might account for the increase in filings in 2017 and beyond.

Of course, we should not forget the possible effect of the Brexit referendum in 2016. Although most responsible attorneys were advising from very early on that dual filing seemed unnecessary (advice supported by the progress made in the Brexit negotiations throughout 2017 and 2018), the small rise in the number of non-resident filings over this period could perhaps be attributable to a ‘Brexit effect’.

“It will be interesting to see how the relative numbers of filings sit after a few more years. Will the number of designs filed in the UK reach 50% of EU filings by 2025?”

In fact, the UK registered design system currently has a number of features that could be seen to make it superior to the RCD system. These include:

With a review of the RCD legislation by the European Commission currently ongoing, we can perhaps expect some of these features to be incorporated into RCD filings. It is even possible that future changes to the RCD system will need to be imported into the UK filing regime to keep the systems aligned.

This means we are entering an exciting time for a reinvigorated UK design system – with the prospect of change always on the horizon.