In 2016-7, JLR applied to register the following three-dimensional shape marks in the UK in relation to a range of goods and services, notably, vehicles and spare parts, badges, toy and model vehicles and maintenance, repair and customisation services. 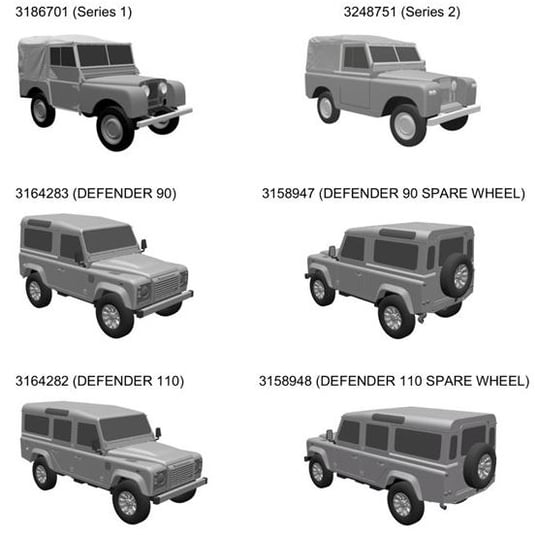 Following examination, objections were raised against the applications as the marks were considered to be descriptive of a sports utility vehicle and toy models of vehicles and lacked any inherent distinctive character. The scope of the objection was subsequently narrowed at a hearing and JLR later submitted evidence of acquired distinctive character in relation to the remaining objectionable goods. The applications were accepted for registration in 2017.

INEOS Industries Holdings Limited (Ineos) opposed the applications based on various grounds, including allegations the marks are descriptive, non-distinctive and the applications were filed in bad faith. In 2019, the oppositions were upheld by the UK IPO Tribunal (“the contested decision”).

JLR appealed the contested decision to the HC. The grounds of appeal included:

By a decision of 3 August 2020, the HC upheld the UK IPO’s decision to refuse JLR’s trade mark applications.

Inherent distinctive character - norms and customs of the sector concerned

The test for the inherent distinctiveness of three-dimensional marks is whether they depart significantly from the norms and customs of the sector concerned by the average consumer. In the contested decision, the Hearing Officer noted the principles established in London Taxi[1], concluding that passenger cars is the relevant sector.

In this regard, the Hearing Officer reached the following conclusions, to which JLR objects:

Firstly, the HC observed that it is not entitled to substitute its own assessment for that of the Hearing Officer, unless there has been a material error in law or their findings are wrong. In relation to each of JLR’s pleas with regards to the assessment of inherent distinctiveness, the HC was satisfied the Hearing Officer’s views were entirely consistent with jurisprudence and did not disclose any error of principle.

In the contested decision, the Hearing Officer noted “the key question is whether JLR has shown that a significant proportion of relevant average consumers would perceive the shapes applied for, without further indication, as distinguishing goods which have been placed on the market by JLR, or with its consent, from those of other undertakings".

JLR’s expert submitted a survey, which allegedly showed that 50% of respondents were confident that the pictures shown to them depicted a Land Rover Defender 90. In the contested decision, the Hearing Officer indicated this figure was “somewhere between 20 and 40%”, therefore the survey shows, in his opinion, “a significant, but not overwhelming degree of recognition of the shape of the Land Rover Defender.” JLR alleged the Hearing Officer conducted a flawed analysis because the figures provided were not readily explicable and not consistent with the expert evidence.

As for the Hearing Officer’s conclusion that “a significant, but not overwhelming degree of recognition of the shape of the Land Rover Defender”, the HC confirmed the Hearing Officer was correct to question whether the survey showed that a substantial proportion of relevant consumers had come to perceive the shape of the Defender as an indication of origin, pursuant to the Nestlé decision[2]. This is because the simple mention of Land Rover and no other brand in response to photos of the Defender’s shape does not equate to the respondents regarding the shape, in isolation, as distinguishing the goods of JLR from those of competitors, as distinct from mere recognition or association. The HC confirmed the Hearing Officer’s approach was entirely consistent with authorities on this subject.

This case confirms the position of the courts with regards to the test for distinctiveness of non-traditional trade marks and the approach to the assessment of survey evidence. JLR is not the first, and certainly won’t be the last, of brand owners losing a battle over non-traditional trade marks. The Land Rover Defender is an addition to the list of shape marks, along with the KitKat four-finger chocolate bar and the Rubik’s cube, which also failed to meet the relevant legal criteria.