The 12 elements of Christmas...

As 2019 draws to a close, so too does the International Year of the Periodic Table- marking its 150th anniversary.  To celebrate the end of this momentous year, we have seamlessly incorporated (wrestled) some of our favourite chemical elements into the 12 days of Christmas,  to save on repetition we’re starting from the “12th day”! 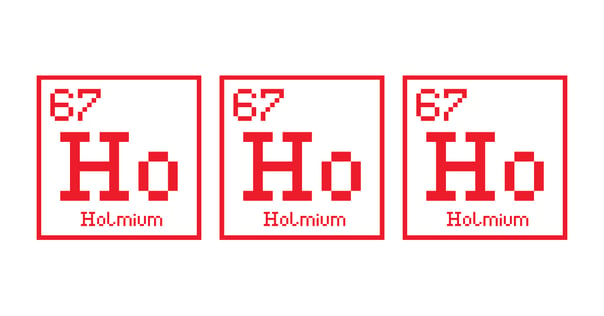 On the 12th day of Christmas my chemist gave to me…

Tungsten (W – from wolfram), doesn’t have much to do with tapping – or drumming for that matter - but its name comes from the Swedish “tung sten”, meaning heavy stone.  As the 7th densest element in the periodic table, it really is a heavy metal (that’s where the drumming comes in). Having the highest melting point of any element (3422 oC) tungsten found wide use as the filament of incandescent light bulbs. Although, after a long reign, lights requiring a tungsten filament are starting to be superseded by more energy efficient LED bulbs.

Plutonium (Pu) has a half-life of 87.74 years.  Its radioactive decay emits a large amount of thermal energy (some say it is piping hot) and so is useful in the generation of electrical power. Especially in applications that must function without maintenance. 238Pu has been used in the power source in several space exploration missions including on Cassini, Voyager, Galileo and the Curiosity Mars rover.

Lanthanum (La) was discovered as an impurity in cerium nitrate in 1839 by Swede Carl Gustav Mosander (pre-dating the periodic table). Owing to its origin story, the name lanthanum comes from the Ancient Greek “lanthanein”meaning “to lie hidden”.  In the periodic table lanthanum precedes the f-block elements (those which have a semi-populated electron f-orbital), for our purposes this constitutes a leap.

Lithium (Li) is the third element in the periodic table and (under standard conditions) the lightest solid element.  Many of you may remember studying lithium in chemistry at school by watching a small piece of this reactive metal dancing around on the surface of water. Lithium has become increasingly important in modern society as an essential component of many batteries used for power storage in electronic goods.

Mercury (Hg – from hydrargyrum), also known as quicksilver, is the only metallic element that is liquid at room temperature. Okay, maybe we are milking this liquid link a little bit, but mercury’s fluidic qualities have fascinated people around the world for millennia.  The element is named after the Roman god Mercury (famous for his speed and mobility), cinnabar (mercury sulphide) was used by the Ancient Greeks and a pool of mercury was found under a marker in a Mayan “Mesoamerican ballcourt”. The first emperor of China allegedly died from drinking a mercury containing cocktail, concocted by his alchemists and ironically intended to give him eternal life.

The semi-conducting element silicon (Si) is of course, extremely relevant in modern day life indeed, we’re said to be living in the “Silicon Age”! The metal-oxide-semiconductor field-effect transistor (MOSFET) – the component that microprocessors are made up of - was first demonstrated in 1960 and is now thought to be the most frequently manufactured device ever, an estimated total of 13 sextillion devices (1.3 x 1022 – nearly  0.1 moles!) were manufactured between 1960 and 2018.

When Dimitry Mendeleev first proposed his arrangement of the periodic table he believed there was an element missing between gallium and arsenic.  Owing to its place in the table it was called eka-silicon. Although Mendeleev was able to predict a number of characteristics of this enigmatic element it was nearly two decades later before germanium (Ge) was discovered by Clemens Winkler.  Found  to match the predicted properties of eka-silicon, you might say germanium was “a-laying” in the right place all along...

Gold (Au) takes its elemental symbol from the word “aurum” which stems etymologically from the Proto-Indo-European word for “glow”.  Gold is very stable and often found in its elemental state in nature.  It is thought to have been the first metal used by humans with small amounts of natural gold having been found in Spanish caves dating back to the late Palaeolithic era (~40,000 BC). Well, why deviate from the best line of the song when you don’t have to.

Carbon (C), the maker of four bonds, the element of life. Really all birds are made of carbon in some respect. A fascinating element, carbon can form a number of wildly different allotropes such as graphite, diamond and buckminsterfullerene, which is perhaps the only allotrope to be named after an architect.

Francium (Fr), named after France - its country of discovery, has an odd set of accolades. It was the last element that occurs in nature to be discovered from a natural source (in 1939, by Marguerite Perey). It is the second-most electropositive element, after caesium, and the second rarest naturally occurring element, after astatine.

Titanium (Ti), an element which is most well-known for its high strength-to-weight ratio is actually most commonly used as titanium dioxide a brilliantly white pigment (sharing its colour with that of peace doves – although not turtle doves) used in anything from paints to toothpaste. Within a few years of each other, at least three scientists discovered titanium independently. It was eventually named after the Titans of Greek mythology.

And phosphorus in a Chemistree

Phosphorus (P) is another chemical essential for life. The reactive centre of the molecule adenosine triphosphate (ATP), phosphorus is key to the energy cycle in living organisms. In 1669 Hennig Brand managed to isolate P… from pee. While experimenting with urine in search of the philosopher’s stone (not the Harry Potter one! ) Brand isolated a white material that glowed in the dark.  The name phosphorus comes from the Greek words for “light” and “carry” roughly translating to “light-bringer”.

If you’ve made it this far, I’m impressed! Thanks for reading and

Joseph is a patent attorney working in the chemistry and materials field assisting in the drafting and prosecution of UK and European patents. He also has experience in opposition and appeal proceedings before the EPO and the management of national/regional phase entry of international patent applications.
Email: joseph.newcombe@mewburn.com
Comments