In 2008, Ferrari S.p.A. (Ferrari) obtained registration of the following three-dimensional shape depicting the shape of the Ferrari 250 GTO model in the European Union in relation to various goods, including cars and spare parts, clothing and toys. 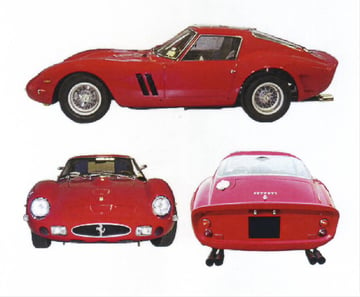 A rival car designer, Ares Performance AG (Ares), filed an application to cancel Ferrari’s registration on the grounds the mark had not been used in relation to the goods for a continuous period of five years. Ares was founded in 2012 by Dany Bahar, the ex-Senior Vice President Commercial and Brand at Ferrari.

By a decision of 29 May 2020, the Cancellation Division partially upheld the invalidity action to the extent the registration now protects toy vehicles and scale-model vehicles only.

Use it or lose it

Ares alleged Ferrari’s EUTM has not been put to genuine use for a continuous period for five years. In particular, the goods relating to vehicles and spare parts were only used for a few years in the 1960s when the Ferrari 250 GTO models were manufactured, which is prior to the trade mark’s registration date in 2008.

If a registered EUTM or UK trade mark is not used within five years of being put on the Register or if subsequently it has not been used for five years then third parties can seek to cancel it on the grounds of non-use. This practice is distinct from other territories such as the US where it is necessary periodically to prove use in order to maintain a trade mark registration. In revocation proceedings, the burden of proof lies with the trade mark proprietor to provide documentation attesting to the commercial, and not merely token, use of the mark.

Ferrari counter-argued use of the mark in relation to vehicles and spare parts largely coincides with the presence of the car itself on the market, for example, through public auctions, which Ferrari argued is a more public form of use. Ferrari emphasised the 250 GTO model is aimed at a very niche sector of luxury car collectors, celebrities and the superrich. As such, the extent of use need not be high. Additionally, there is still a market for this type of product, hence Ferrari has a legitimate commercial interest to keep the registration alive.

Furthermore, Ferrari alleged that it has been providing after-sales services, including maintenance, inspection, restoration, painting and the provision of spare parts to owners of second-hand 250 GTO models. Ferrari pointed out that the criteria for demonstrating use may also be met in certain circumstances where the goods in relation to which the mark was once used are no longer available, but the trade mark owner makes use of the mark for after-sales services, such as the sale of accessories or related parts or the provision of maintenance and repair services.[1][2] In support of this position, Ferrari referred to joined cases C-720/18 and C-721/18 Testarossa in which the European Commission in the context of a preliminary ruling stated that the marketing of second hand goods, already put on the market by the trade mark owner, is considered use of the mark if the owner inspects, reconditions and certifies the goods before they are resold, thereby contributing to the survival and value of the goods.

Use not attributable to Ferrari

The Cancellation Division held Ferrari failed to demonstrate the mark had been used during the relevant period. In particular, it was recalled that the recognition of, or goodwill in, the mark amongst the public are irrelevant to proceedings concerning non-use. The Cancellation Division went on to comment that the presence of, and demand for, second-hand models of Ferrari GTOs did not constitute genuine use attributable to Ferrari because the company had no influence over resales.

In relation to Ferrari’s argument that use of the mark was demonstrated through after-sales services, the Cancellation Division noted the mark in question does not appear on the documentation provided and that the services were carried out under the

, prancing horse logo and ‘Ferrari Classiche’ brands, which does not constitute use of the mark for the purposes of the assessment. Regarding Ferrari’s claim to providing reconditioning and certification services in particular, the Cancellation Division distinguished the Testarossa case in which this principle was established because the ruling was made in the context of second-hand cars being resold by the trade mark owner itself, rather than by third parties, as in the present case. The Cancellation Division further held the evidence provided in relation to clothing was insufficient.

Fortunately, Ferrari’s evidence of use in relation to model cars was considered sufficient to show the mark was genuinely used during the relevant period and in the EU. The scope of protection of the registration was therefore reduced to toy cars and scale-model cars.

The chequered flag is yet to be waved as the EUIPO register shows Ferrari has filed an appeal against the decision of the Cancellation Division. Nevertheless, there are some notable take-away points from this case concerning non-use. Importantly, brand owners should endeavour to take a proactive approach to safeguard their rights from cancellation for non-use.

Appropriate measures to be taken include:

For further information, please refer to Trade Marks: Use it or lose it on our website or contact us.