In part, the increasing number of collaborations is down to advances in information technology, communication, and knowledge sharing.  However, another key factor is that research fields are becoming more multifaceted and interrelated, while researchers are simultaneously becoming more specialised.  More than ever, research needs collaborations to flourish.

Polymer chemistry, in particular, spearheaded the collaborative culture that is now pervasive throughout scientific study.

A pioneering case is that of Karl Ziegler and Giulio Natta.  In 1963, their work on Ziegler-Natta catalysis was recognised for its impact on the manufacture of modern plastics, and is still a mainstay of polyethylene manufacture today.

Ziegler-Natta catalysis was the first process to yield high molecular weight polyethylene at low pressures and temperatures.  This not only reduced cost, but gave stronger, higher density plastics by virtue of the limited branching and more crystalline molecular structure that was achieved.

Their further work on catalyst structures enabled stereochemical selectivity to be achieved in industrial scale manufacturing.  This transformed the customisability of plastic’s properties and ignited an explosion in its applications, dawning the era of “everyday plastics” which is only now beginning to wane.

At the turn of the millennium another prize winning polymer revolution was brewing, this time in conductive polymers.

Traditional organic polymers are the antithesis of conductive.  However, Alan Heeger, Alan MacDiarmid and Hideki Shirakawa developed polymeric architectures with remarkably high conductivity.  Taking inspiration from doping methods commonly used in semiconductors, MacDiarmid and Heeger doped sulfur nitrile polymers with bromine atoms to induce a 10 fold increase in conductivity.  Doping with bromine removes an electron from the polymer strand, leaving a positive ‘hole’ to shuttle down the length of the polymer and transfer charge like a molecular wire.

A similar approach was later applied to polyethyne, which has an electronic structure analogous to sulfur nitrile, but benefits from better flexibility and durability.  However, polyethyne demonstrates a 106 conductivity increase over its undoped analogue (opposed to only 10 fold for sulfur nitrile). 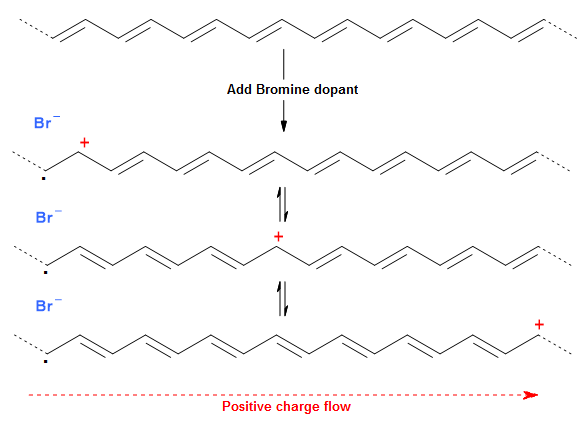 The importance of determining ownership

Clearly these prize-winning innovations represent only a tiny fraction of successful research collaborations in the polymer field, let alone across all research areas.  The total commercial value vesting in collaborative innovation is understandably huge and collaboration agreements with strong IP provision can be hugely beneficial to collaborative partnerships.

That said, in order to realise the potential value, it is essential to take account of the intellectual property nuances associated with collaborative inventions.  Inventorship, ownership, entitlement and benefit need to be considered early on in the patent application process. The often complex inter-relations between organisations, especially in cross-border arrangements, can bring particular challenges so it is generally easier to sort out the chain of ownership and any possible ownership issues sooner rather than later as relevant evidence may have been lost or forgotten over time.

The Mewburn Ellis legal team has extensive experience drafting and advising on IP agreements.  They can support all IP transaction needs, including advising on strategy and deal planning as well as preparing, reviewing and negotiating contracts. All advice and support is given with a high degree of commercial understanding and is designed to ensure the best possible outcome in any given deal.

Niles is an Associate and Patent Attorney working in the chemistry field. Niles has an MChem degree in chemistry from the University of Oxford. His undergraduate research project was on the synthesis of novel perylene diimide containing macrocycles for anion recognition and sensing applications.
Email: niles.beadman@mewburn.com
Comments