As we enter December, and the year draws to a close, many trade mark practitioners and brand owners alike will be reflecting on what lessons we have learnt and how the ever developing trade mark landscape has evolved over the past twelve months. In this article we look at some interesting decisions issued by the UK and EU courts and trade mark offices concerning pharmaceutical trade marks. We will highlight key learning points and examine what pharmaceutical trade mark owners need to take away as they move into 2023.

Our first case has just snuck into the 2022 round up by virtue of a decision on a procedural point issued in January 2022. The substantive decision, running to a lengthy 298 paragraphs, was issued the previous month and highlights a number of important issues, including:

Dr August Wolff had been using the trade mark VAGISAN in the UK since 2013 in respect of vaginal healthcare products. They ran major advertising campaigns in 2016 and 2018, and expanded the VAGISAN product line in 2019 and 2020. Subsequently, Combe International brought proceedings before the High Court of England and Wales, claiming that use of the mark VAGISAN infringed their registered trade mark VAGISIL, which has been used in the UK since 1984.

In his analysis of the claim to infringement, Mr Justice Adam Johnson acknowledged that descriptive prefixes can be, and often are, used as a signpost for consumers to tell them what the relevant product is used for. He also accepted the proposition that VAGI is suggestive of the idea of the vagina.

However, he rejected the Defendants’ argument that the VAGISIL marks had only a low level of distinctiveness in the UK, stating that, whatever their inherent level of distinctiveness, they had acquired enhanced distinctiveness given their use and their position in the market. He commented “I find it inescapable that the average consumer in 2013 would have regarded the entire word VAGISIL as an identifier of trade origin, and would not have discounted the embedded elements VAGI or VAGIS as serving only a signposting function”. As a result, he concluded there was (and is) a risk of confusion between VAGISIL and VAGISAN. This was further supported by the “striking” volume of evidence of actual confusion presented by the Claimants.

Mr Justice Adam Johnson was not persuaded by this argument, stating that “as a straightforward matter of language, it seems to me clear that if the owner of an earlier mark seeks to invalidate the registration of a later mark, he cannot be said to be acquiescing in the use of a registered trade mark, because he is saying that there has been no valid registration”.

A defence of honest concurrent use was also dismissed quickly, on the grounds that there had not been continuous co-existence for a sufficiently long period so as to engage the defence and, in any event, the use by the Defendants was not honest. They were aware of the Claimants’ objection to use, and of the accumulating evidence of actual confusion, but still persisted in advertising their products for sale.

In September 2020, the Defendants had begun to rebrand their UK range of products under the sign “DR WOLFF’S VAGISAN.” 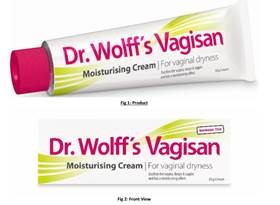 They sought a declaration that this rebranding does not infringe the VAGISIL mark. However, the request was denied, with Mr Justice Adam Johnson concluding that the word VAGISAN in the composite phrase DR WOLFF’s VAGISAN should be regarded as having an independent distinctive role and therefore there is still a risk of confusion.

In January 2022, Mr Justice Adam Johnson heard a request by the Defendants for a stay of the injunction granted for a period of 21 weeks in order for a rebranding process to be completed. However, he was not persuaded that there was any justification to allow the Claimants to continue selling infringing products: “I do not see, as a matter of logic and principle, how a defendant can ask to be allowed to continue to carry out unlawful activities on the basis that if he is required to stop in relatively short order, he will be inconvenienced and disadvantaged”.

With its refusal of Voco’s blister pack mark, the EU General Court has again reminded us of the difficulties protecting shape marks.

In September 2018, Voco GmbH applied to register the 3D shape of a blister pack at the EUIPO in respect of “Dental preparations and articles” and “Packaging materials; Blister packs for packaging”. 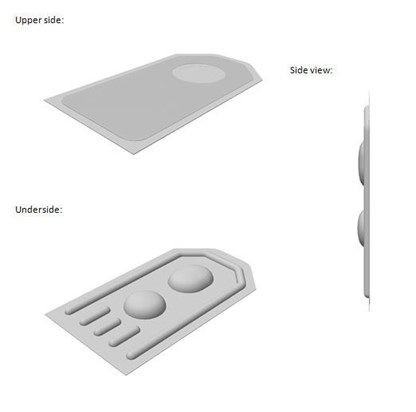 The EUIPO rejected the application for being devoid of distinctive character. On appeal, the General Court upheld the previous decision of the EUIPO Board of Appeal, noting that blister packs with a rectangular, round or amorphous basic shape are common in the medical industry and the shape applied for in this instance didn’t differ substantially from the norm.

Our Special Report on Non-Traditional Pharmaceutical Trade Marks discusses shape marks, the requirements for registration, and the potential pitfalls in more depth.

This decision of the EUIPO Board of Appeal from June 2022 concerns an EU trade mark application for the mark BIOPLAN filed by BRM Extremities s.r.l. in respect of various orthopaedic devices in class 10. The application was opposed by Laboratorios Ern, S.A. on the grounds of their earlier registration for BIOPLAK covering pharmaceutical products in class 5. The opposition was rejected on the grounds that the goods are dissimilar.

The Board of Appeal confirmed the earlier findings of the Opposition Division. It analysed proof of use of the earlier mark submitted by the opponent and concluded the mark had been put to use in respect of “Pharmaceutical products, namely platelet antiaggregant” only. 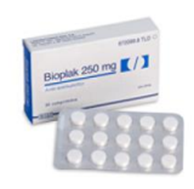 Comparing these goods to orthopaedic articles and devices and implants to prevent or manage musculoskeletal problems, the Board held that they have different natures, methods of use and distribution channels:

“The applicant’s goods have a specific purpose – to prevent musculoskeletal problems or help healing after surgery, whereas the opponent’s goods have a totally different purpose, namely, to prevent thrombosis. As stated by the Opposition Division, they are usually produced by different manufacturers. It is not common for a pharmaceutical company to have a sub-brand producing orthopaedic articles”.

Where the goods are dissimilar, there can be no likelihood of confusion.

This decision has been appealed to the EU General Court, but it seems unlikely it will be overturned.

At the start of 2022, the High Court of England and Wales issued this decision in an appeal against an opposition decision of the UK Intellectual Property Office (UKIPO).

On 22 November 2019, Xtend Scientific Limited (now known as Aviv Scientific Ltd) applied to register the trade mark AVIV in the UK in Classes 9, 10, 35, 41, 42 and 44. Axogen Corporation opposed based on earlier registrations for AVIVE covering surgical implants comprised of biological tissues, namely, human and animal tissues for medical use, drug therapies, pharmaceutical, veterinary and sanitary preparations. The UKIPO Hearing Officer found that there was a likelihood of confusion in respect of all of the goods in Class 10, but she dismissed the opposition in relation to all other classes.

In the appeal decision, Mrs Justice Joanna Smith DBE discussed the issue of complementarity of goods in some depth. Having considered various case law put forward by the opponent, she concluded that:

“The fact that goods and services may plausibly be used alongside each other in the medical context, or in an unspecified medical procedure, is not, to my mind, sufficient to establish the standard of complementarity”.

The simple fact that goods and services are all used in a medical context does not mean they are indispensable or important for the use of one another.

Even with regard to a comparison between the opponent’s surgical implants and the applicant’s medical services in class 44, Mrs Justice Joanna Smith DBE held that the Hearing Officer had been entitled to find dissimilarity in the absence of evidence to the contrary. The appeal was ultimately dismissed.

This case highlights that goods and services need to be considered carefully and cannot be viewed as similar merely because of their medical nature. It is also a reminder of the importance of putting together supporting evidence of market conditions and the norms within the sector when arguing that consumers would expect particular goods and services to originate from the same or economically linked undertakings.

In 2020, Meta Cluster GmbH applied to register the mark Clustermedizin at the EUIPO for goods and services in classes 5, 9 and 44, including “Preparations for medical and veterinary use; food supplements for humans and animals”. The application was rejected by the examiner and again on appeal on the grounds that the mark is descriptive and devoid of any distinctive character. The applicant further appealed to the EU General Court, which upheld the previous decisions.

The word 'medizin' is German for medicine. Whilst ‘cluster’ is an English word, the EUIPO Board of Appeal had found that this term had entered into ordinary German understanding. Therefore, they relied on the perception of the mark applied for by the public in Germany and Austria. As a whole, they said that the mark applied for designates medicine which is based on clusters, i.e. a set of similar things that occur together.

The EUIPO examiner had highlighted a newspaper article from 2007 in which 'clustermedizin' was used to refer to an alternative therapeutic method. The applicant argued that this was trade mark use. However, the Court held that it was merely being used as the generic name of a method of diagnosis and naturopathic therapy. Some limited use of the symbol '®' did not help the applicant as this symbol was not systematically added to the mark in all the evidence submitted. Furthermore, the fact that the mark had been registered in Germany for 20 years did not preclude it from being refused registration at the EUIPO.

This case is a helpful reminder that brand owners need to be cautious when adopting trade marks with clear meanings in the context of their goods and services. In particular, registration of the mark in one jurisdiction does not guarantee the mark will be accepted in all territories of international importance. Furthermore, it can be challenging to ensure the mark is used in such a way that does not highlight the descriptive nature of the mark. Even post-registration there can be difficulties, as in some jurisdictions, like the UK and EU, a registration is vulnerable to cancellation if the mark becomes generic due to the acts or inactivity of the proprietor.