This information is available in Japanese, Chinese and Korean.

Find out more about our opposition services and why Mewburn Ellis is Europe's number one choice. You can also find out about the Most Opposed Patents of 2020 from our latest research and read lots more in our opposition blogs.

A European patent may be opposed once it is granted. The opposition is handled by the European Patent Office (EPO) and so is a central procedure effective for all designated countries, i.e. the EPO opposition procedure is separate and in addition to national invalidity/revocation procedures. 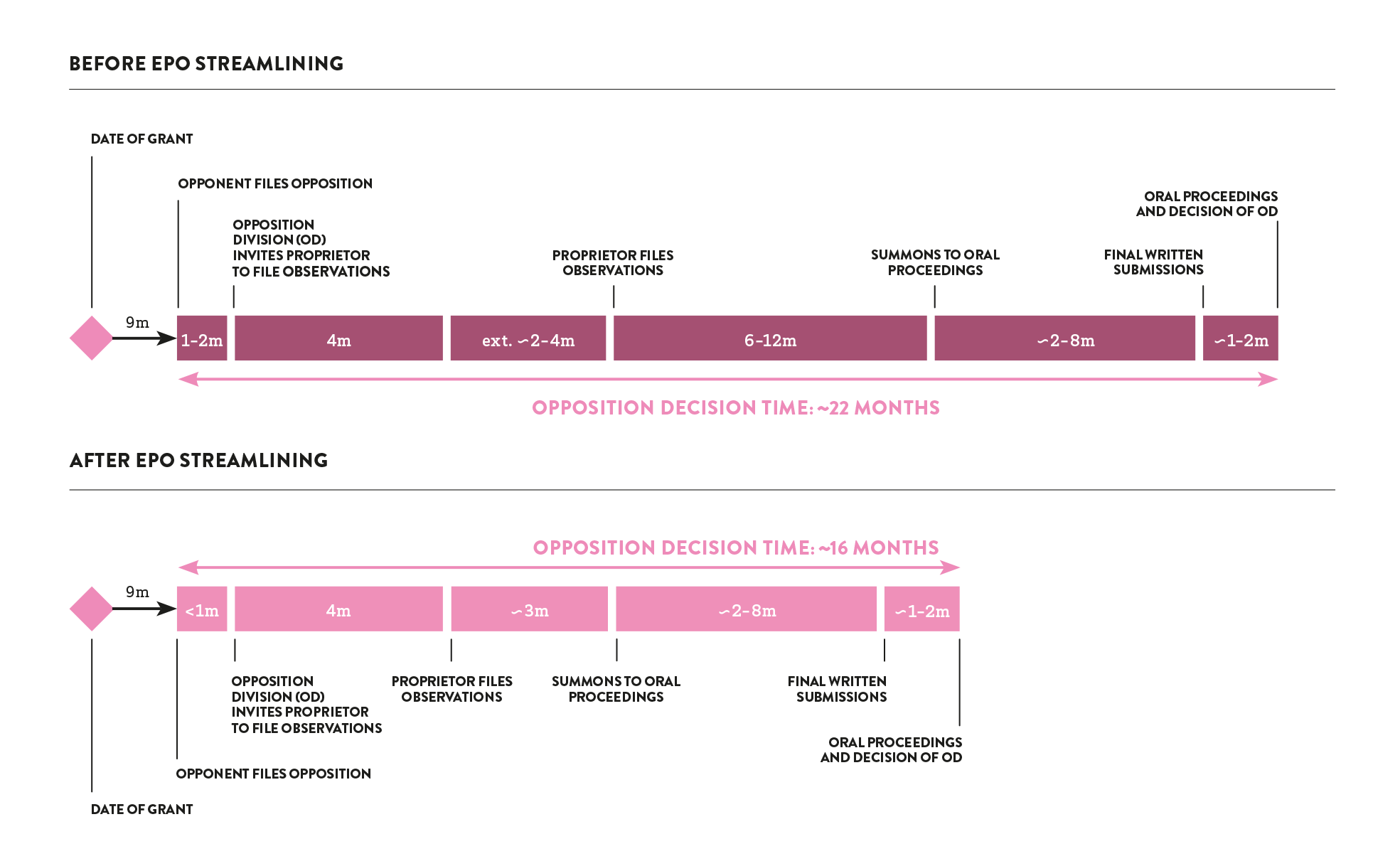 Opposition to a European patent can be filed at any time within nine months following the mention of grant of the patent in the European Patent Bulletin; it is a post-grant procedure. The opposition term is not extensible. Within the opposition period, both a notice of opposition and an opposition fee must be filed.

An opposition can be filed by any person (legal or natural), including (according to a decision of the Enlarged Board of Appeal) a nominal opponent ("a straw man"), thus allowing the true identity of an opponent to be concealed.

However, such a procedure must be not such as to conceal opposition by the proprietor himself (self-opposition is not allowed), or improper representation before the EPO.

An opposition fee of €815 (about US $933) must be paid within the opposition period. However, the likely overall cost is much greater than this.

In addition to providing details of the opponent and patent to be opposed, the Notice of Opposition must state:

To be admissible, the proprietor and Opposition Division must be able to understand, from the opposition papers, the case to be answered.

There are only three possible grounds of opposition:

Oppositions are handled by what is usually a three-member Opposition Division. The Notice of Opposition is initially communicated to the proprietor and after it has been examined as to its admissibility the EPO set a four month period within which the proprietor is invited to file observations on the opposition. This four month term is extensible.

The deadline is not fatal as not filing any observations does not automatically result in revocation of the patent. The EPO will, in any event, examine the opposition of their own motion and come to a decision on the basis of whatever the opponent and the proprietor themselves submit from the filing of the opposition onwards.

The proprietor’s observations are then communicated to the opponent and thereafter there is no real set procedure. Indeed, should they so wish, the Opposition Division may, shortly after this communication, give an immediate decision.

As a precaution, therefore, an opponent or proprietor should, with his first submission, request a hearing ("oral proceedings") in the event that the Opposition Division should form an intention to issue a decision adverse to him (see also below). However, generally the EPO will invite the further submissions of the parties to the extent and the number of times they feel it necessary to enable them to come to a preliminary view on the case.

Each party should receive the same number of opportunities to file comments and further arguments to supplement what has gone before.

At some point, a preliminary and non-binding opinion will often be issued by the EPO, allowing the parties to see how the merits of their respective cases have been received by the EPO.

Frequently, the proprietor will put in, either at the observation stage or perhaps even in the later stages of the opposition procedure, certain ‘requests’, called ‘main’, ‘first subsidiary’, (or ‘first auxiliary’), ‘second auxiliary’, et seq., requests. These represent a series of fall-back positions by way of amended claims which the proprietor is entitled to have examined sequentially by the EPO.

However, the sequence of the requests must be carefully chosen as subsequent requests are only examined after the preceding request has been found not to be allowable. If one of these requests is found to be allowable, the patent would then be maintained on the basis of that allowed request.

It is advisable that whatever is to be introduced into the opposition proceedings, e.g. prior art, is submitted at the beginning with the Notice of Opposition. Likewise, requests of the proprietor are best filed at the observation stage. Strictly speaking, admittance or not into the proceedings of any evidence filed after that is at the discretion of the EPO. If it is of "crucial relevance", then it will usually be admitted; it is a fundamental EPO principle that patents of doubtful validity should not be allowed to remain against the public interest.

However, the less relevant and the later such late-filed additional evidence is submitted, the less likely that it will be admitted. Thus, when contemplating the filing of an opposition it is important to commence preparation of whatever evidence is to be filed, including, for example, searching, generating experimental data, etc., as early as possible prior to expiry of the opposition period.

As mentioned above, it is normal for at least one party (usually both) in the opposition to request "oral proceedings", i.e. a hearing at which they present their case(s) orally before the members of the Opposition Division, who cannot refuse this request; it is enshrined in EPC Law that every party has a right to be heard.

In advance of the oral proceedings, the EPO set a date and issue an indication as to the points to be discussed, usually including the preliminary opinion mentioned above. It is usually very difficult to successfully change dates; ‘serious substantive reasons’ must be shown.

The EPO also sets a date usually one month (but sometimes two months) before the date of the hearing for filing any new evidence or (by the proprietor) any new main or auxiliary request for consideration at the hearing. New facts and evidence presented after that date need not be considered, unless admitted on the grounds that the subject of the proceedings has changed.

The oral proceedings are a little like a mini court hearing, but less formal. They are held in the language of the patent, but if requested simultaneous translation into another official language of the European Patent Convention is permitted. In theory, no one party should spring any surprises on any other party, including the Opposition Division (although, regrettably, they often do). The hearing is essentially for the purpose of repeating and expanding on arguments usually already presented on the basis of the evidence already filed.

Occasionally, witnesses can be called to give evidence (upon certain notice and formal requirements being satisfied). Normally, each side’s European Patent Attorney presents their case. A decision will almost always be reached and given at the hearing, with the official written decision issuing (usually from one to six months) afterwards.

Any party adversely affected by the decision of the Opposition Division may file a notice and grounds of appeal, due within an inextensible period of two months and four months respectively from the date of the written decision.

The costs associated with opposition vary widely. We would normally estimate the cost of preparing and filing the substantive Notice of Opposition to be in the region of £3000 - £15000 (about US $4500 - $23000), depending upon the difficulty of the case and the extensiveness of the prior art. The cost may be considerably higher, depending upon volume and complexity. Thereafter, for a case involving a round or two of correspondence between the parties during the opposition procedure and preparing for and taking oral proceedings, estimated costs may be in the region of £5000 - £40000 (about US $7500 - $60000). Similar costs are likely on appeal.

Although, in theory, such costs can be dramatically reduced, for example by less rigorous searching and a reduction in the depth of analysis, we do not recommend this. Thorough preparation is often the key to a successful opposition or defence.

Under the EPO’s new “Early Certainty” initiative, a decision should be given 15 months after the expiry of the opposition period in straightforward cases, and the EPO is going some way towards reaching this goal.